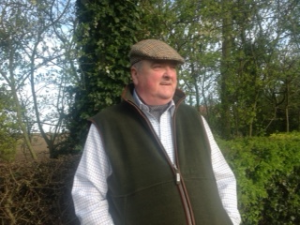 My wife Elaine and I have lived in Billesdon since December 2015 with our little dog Oscar, although we have had connections with the village for many years. My wife's grandmother was born here and I had an uncle who lived here. We retired to Porlock on Exmoor but returned to the area following a short period.

My working life started as a blacksmith, however I ended up working for the Trafalgar House Group who through Lord Mathews of Fleet ran large companies such as Daily Express Newspapers, Cunard Shipping Lines, Whitbread Group and other national and prestigious companies. I retired as a Director at the end of 2000 due to ill health. My wife also retired at the same time from her Interior Design business following a successful association with the Laura Ashley Group.

Following this I studied Humanities at university level and so my general interest is with the arts. My main passion however is Rugby Union. I was a member of Leicester Football Club back in the late 60's early 70's and have been Vice President of Market Harborough, formerly Kibworth Rugby Club for over 15 years and I get involved with many of our local clubs and the RFU.

Register of interests for Cllr Williams

Billesdon Allotments are now open on Gaulby Road with vegetables and fruit growing well in our good quality top soil. Come and get involved in this great community activity. There is currently a short waiting list, but if interested, please contact Jonathan on 259 6681 or Anna on 07887 843 908.